You are here: Home1 / About the Artist

Paul became interested in the Arctic and its people in the early 1980’s after discovering the joys of Inuit stone carving and after reading Jean Malaurie’s, “The Last Kings of Thule”, Malaurie’s book described his year-long stay with the Ellesmere Island Inuit in the 1950’s. At that time, the Inuit people were on the cusp of modernism, nearing the end of the period in which they were dependent upon a nomadic lifestyle for food. Paul’s first visit to the Arctic came some 30 years later in 1988 when he travelled to the hamlet of Pangnirtung on Baffin Island as part of a hiking trip into Auyuittuk National Park.

It was immediately clear that Inuit life was significantly different from when Malaurie visited. The people living there were no longer nomadic, living in heated wood framed homes, pushing their boats along with outboard kickers instead of paddles, replacing dog teams with snow machines, and even providing the Disney Channel and M-TV to their children.

However, is was apparent that, even though they had adopted certain types of modern technology,  they clearly remained identifiable as Inuit people, clinging tenaciously to important traditions, such as including Arctic mammals in their diets, wearing mixes of modern and traditional clothing, highly valuing their environment and worrying about its future, maintaining their history through stories and art, and continuing to be the friendly, gentle people described widely in the writings of 19th Century Arctic explorers.

They have also worked energetically alongside the Canadian government to proactively preserve their traditional cultures. Most notably, the Nunavut Territories were established in 1999, giving aboriginal people governmental control of the largest Territory in Canada. In addition, customary Canadian laws, such as those of adoption had to be modified, because they sometimes clashed with those of aboriginal traditions.

Paul has viewed an amazing collection of Inuit stone carvings that was initiated in 1956 through the sponsorship of Judge Sissons, the first Supreme Court Justice of the Northwest Territories Supreme Court. The first piece in the collection was carved by Kaotak, a subject in one of Justice Sisson’s early trials. Kaotak gave Sissons a carving depicting his feelings while he was being tried for the murder of his father. Sissons is depicted in the carving as a giant, angry-faced monster peering down over his bench at a slumped over miniature Inuit man (www.nwtcourts.ca/Sissons/sissons.htm). Justice Morrow replaced Sisson’s in 1966 and continued the tradition, building the carvings into the Sissons/Morrow Collections, which is now deeded in Trust to the Senior Justice of the NWT Supreme Court.

During the past 25+ years of trekking, paddling, and meeting native artists in hamlets strewn across the top of the world, Paul has come to respect these wonderful people, their stories, their land, and their art. Some of the more notable places Paul has visited are indicated on the accompanying Arctic map and include:

Inuksuk in NW territories of Canada 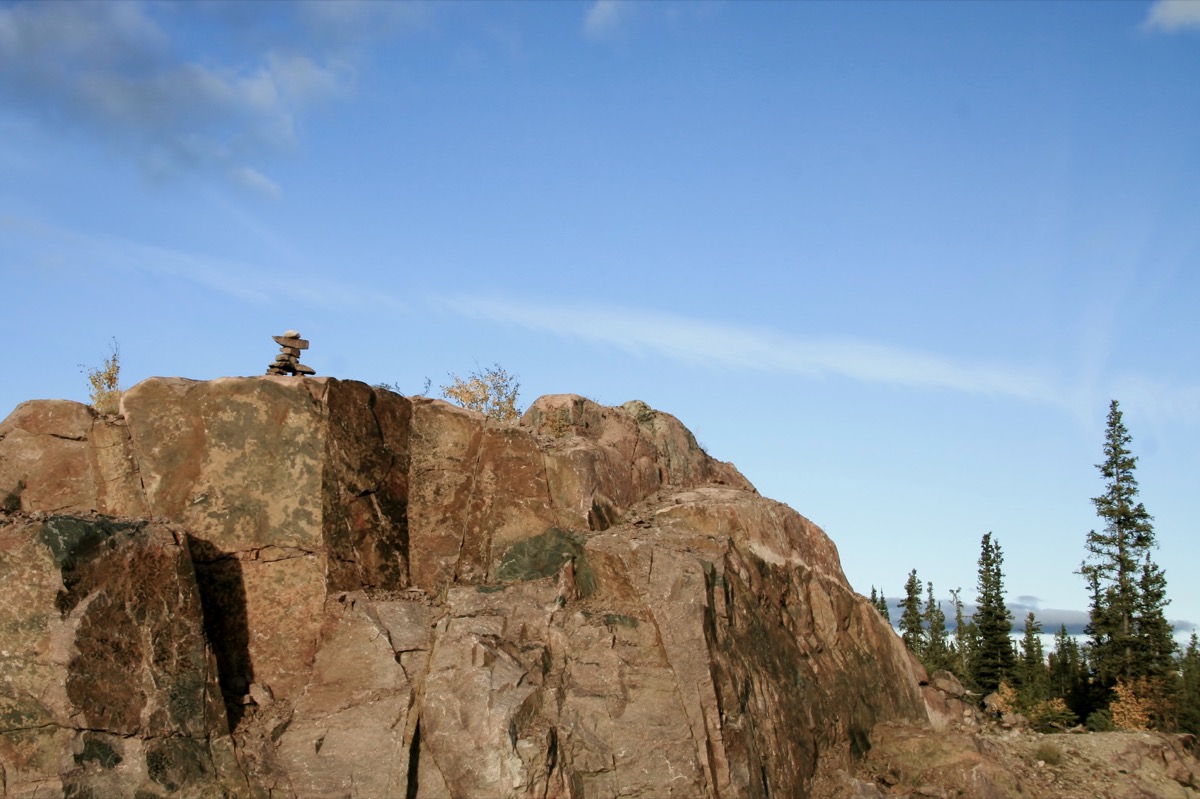 Paul’s World is Turned Upside Down

Paul’s life included neither stone carving nor the Arctic until he was more than 30 years old. He was initially in science, earning a Ph.D. in Botany and Plant Pathology from Iowa’s State University in 1970 and then working as a plant disease specialist and researcher for the Tennessee Department of Agriculture in Nashville.   After four years there, a hunting accident took his sight and temporarily turns his world upside down.  Following a year or so of rehabilitation and making a new life’s plan, he returned to Graduate School at Western Michigan University and gained a Master’s Degree in Blindness and Low Vision Studies.  He spent the next two years orienting to his new life’s reality, working as a therapist in Elkhart, Indiana and then as Assistant Professor at Northern Illinois University.  In 1978, he began a career as a university educator at WMU’s Department of Blindness and Low Vision Studies, where he taught a diverse course load and conducted research, authored books and articles, and guided students through their academic programs for some 30 years.

It was during his Master’s work at WMU that he visited a “Touch Art Exhibition” in Elkhart and experienced the life changing event that triggered his interest in Inuit people, their art, and the Arctic. This event was his first ever “touch look” at a highly polished stone carving. He later said, “The piece I picked up was so fantastic!  Its form was so perfect, its smooth surfaces so inviting, and its beauty so overwhelming that I knew right then and there that I had to find a way to create it. ” As these pages attest, he has, indeed, found a way and that way is highly efficient and unique. He explains that the skill to carve by touch came quickly. In fact, he says, “carving by touch appears to him to be automatic, transferring from a visual to a tactual process seamlessly. He describes this transfer as a result of the phenomenon of “brain plasticity,”, that is, the human brain’s ability to adapt and perform multiple functions.

In this case, the processing of touch in the brains of people who are blind is transferred to the brain’s vision center, essentially switching visual input from the eyes to the hands. Also, the brain’s visual center contains more nerves than the location where touch is normally processed, enabling the person who is blind to have a higher level of touch acuity than before vision loss.

Paul is a member of the Kalamazoo Institute of Arts and has been carving for more than 25 years. He has held numerous showings, including two international exhibits in New Zealand. He has also been awarded two “Best In Show” prizes and three national awards for his sculptures. He has an outdoor marble salmon sculpture, entitled, “Infinity” installed in Hartford, CT  that he co-produced with his friend Helen Lee and one Moose antler sculpture of an eagle, entitled, “Kluane” in the permanent collection of the Kalamazoo Institute of Art.  In addition, he founded the Michigan Art Education Camp for Students with Visual Impairments and directed it for nearly 15 years. He also designed and taught the only university adaptive art class for people with visual impairments in the Country and has taught stone sculpting to literally hundreds of people, including three workshops for Tlicho First nation people with visual impairments in Canada’s Northwest Territories. 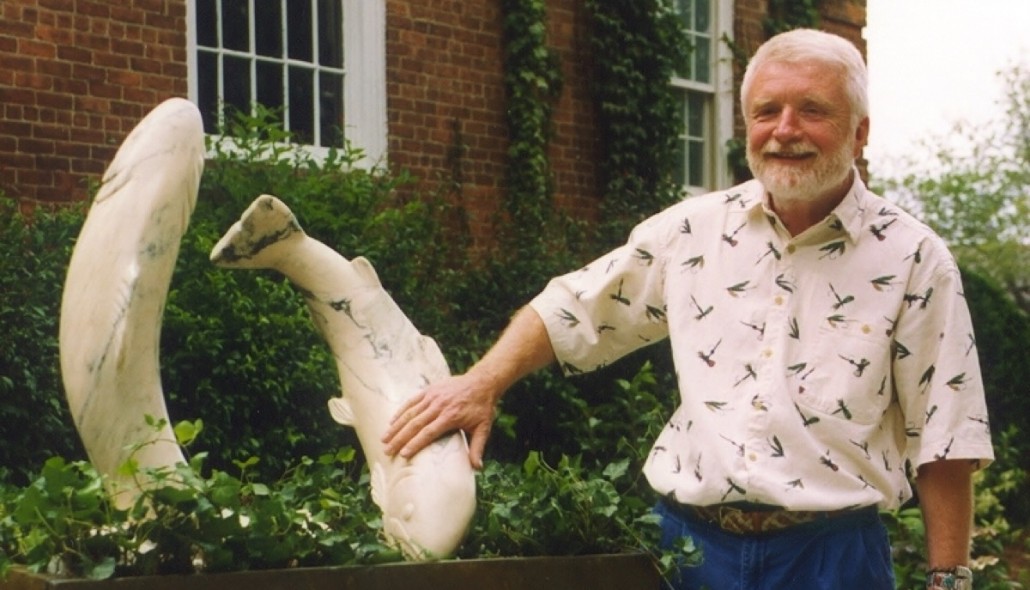 Paul formerly presented his work at www.ananastonecarving.com. The launching of Arcticstonecarving.com is part of an effort to reach more people with his message and his products. His earlier focus was on producing pieces of moderate size, primarily 25 to 100 pounds that were aimed at relatively serious collectors of Arctic art. Now, he will continue to produce these larger carving, but increase his output of smaller pieces, hopefully making them more accessible to everyone.  Paul will also, for the first time, place pieces from his and Jimmy Sue’s Master Inuit Art collection in the Shopping Cart. These are especially beautiful stone and bone carvings, wall hangings, prints, paintings, moose hair and caribou hair tuftings that are Certified Canadian Inuit Art works. He will also become more active locally, participating in the Kalamazoo Institute of Art’s “Art Hop “ and also join the artists at the Park Trade Center in Kalamazoo. In addition, the new shopping cart feature of this site will make purchasing simpler for all interested buyers. Paul is extremely excited about the blog potential that WordPress brings to the site. He hopes it will serve as a conduit for information and resources to flow between him and other carvers, those interested in the art or the Arctic, those who want to share ideas and thoughts on the website’s subject matter, and anyone who has suggestions for improving the site.